How Desmond Koney founded Complete Farmer, a crowdfarming platform in Ghana allowing anyone to become a farmer from the comfort of their home 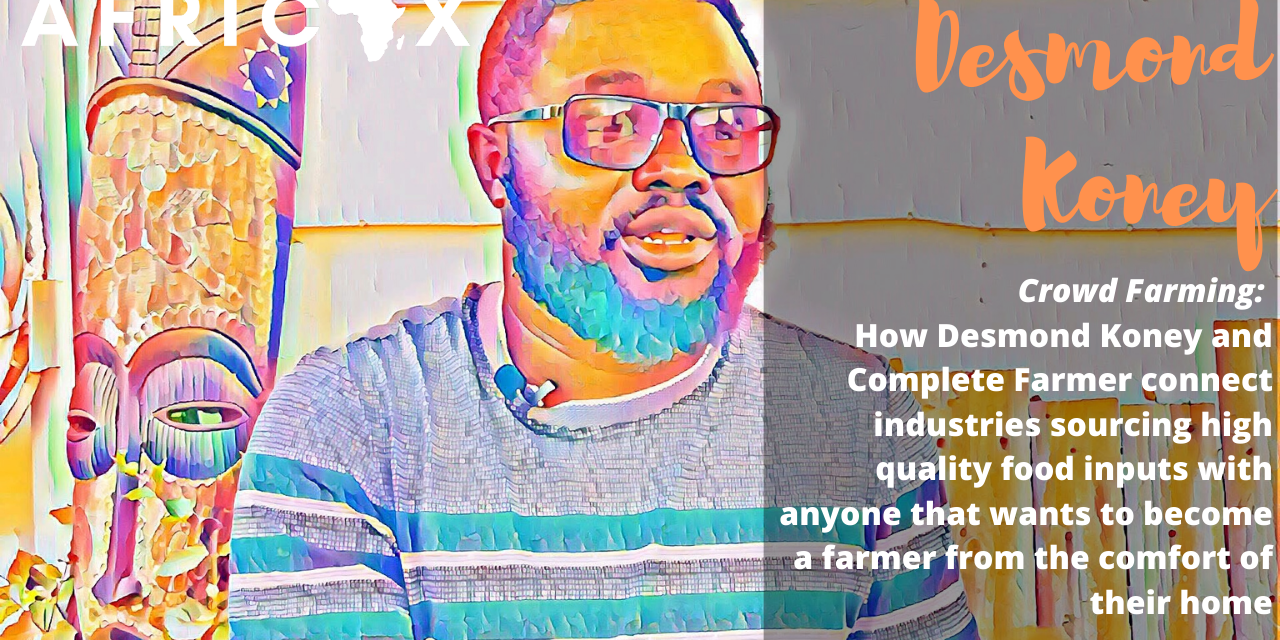 Complete Farmer is a crowdfarming platform founded and based in Ghana that makes it easier to source for quality farm produce in the African market and at the same time, allows anyone to fund a farming cycle as a crowdfarmer from their smartphone, get regular updates about the farm, sign up for an in person farm visit and yes, also to participate in the profits from the farming cycle.

When asked how he came up with the idea to start it, CEO and cofounder Desmond Koney shares that he was exposed to the frustrations of smallholder farming since his father was a smallholder farmer growing pineapples. After coming back home to Ghana from his Mechanical Design studies in The Netherlands, he got the idea to apply his engineering skills to build farms the way factories are built. He decided to become a farmer himself to identify some of the gaps that needed to be filled for smallholder farmers to operate commercially. Together with some friends, they took on some freelancing jobs to make enough money to start farming

During that time, they identified some main challenges. Middlemen were cheating farmers out of quite a bit of money because they buy agricultural produce at very low prices in order to sell at a higher price and make a profit. Thus farmers were producing for a market that they were isolated from and knew little about. Additionally, they learned that research which had been done about crop production value chains in Africa was not being implemented widely. Based off of this, they designed an end to end process to fill the gaps in the value chain. A big part of this was digitising the value chain. Connecting both the demand side and supply side on the platform makes production and indeed the whole chain more efficient.

Through their platform, buyers from different industries can place orders for agricultural produce and Complete Farmer will grow a farm for their particular needs.

Buyers can give specifications in terms of quality, crop nutrients, ripeness and maturity among others, which will guide the production protocols. When a company makes an order, they put it up on the platform and make it possible for anyone who wants to be a supplier of the product to get on board by way of investment.

For as little as 500 USD/acre, anyone with an internet connection can grow for any business that’s on the platform and get returns on investment.

In order for this to work though, Desmond shares that they had to set up a lot of infrastructure for themselves. The physical capital which was first and foremost land, they got through community engagement. They had conversations with chiefs and elders about their plans for the land and how it would benefit the community. They also got access to some land through the government. Apart from that, they also created internet infrastructure on the farms so that farm data from sensors could be uploaded into the cloud. Initial capital from their freelancing afforded them this until they then won the 2017 Kosmos Innovation Center AgriTech Challenge which gave them seed funding to expand their operations.

Desmond further identified that infrastructure is not only physical capital, but also resources in terms of networks of people and institutions that have the know-how to make a difference. In their first year, they built networks with research institutions that were willing to help them with data.

They then involved an agronomist who takes the very academic research and extracts practical implementations. This is in turn taught to carefully selected farmers in a capacity building program. Once they pass the program, farmers are given a demarcation of land and all the necessary logistics to start farming high quality crops. It gives them a day job and regular revenue besides the money that they make from their own smallholder farms.

Desmond shares that all this progress is not only for Complete Farmer, but is something that the farmers, community, and even future startups trying to do something similar can benefit from. He encourages young people to start making a contribution no matter how small they think their idea is, because it adds up to a bigger collective of everyone that is trying to move the African continent forward.

He hopes to partner with institutions that want to help build technologies for farming in the agricultural value chain in Africa.

From Kenya, Dulcie is the social media, content and operations coordinator for AfricaX. She is passionate about personal development, story telling and connecting with people. As a young African and changemaker she brings an inspiring perspective to the expedition as well as a burning desire to help young people on the continent discover their potential.