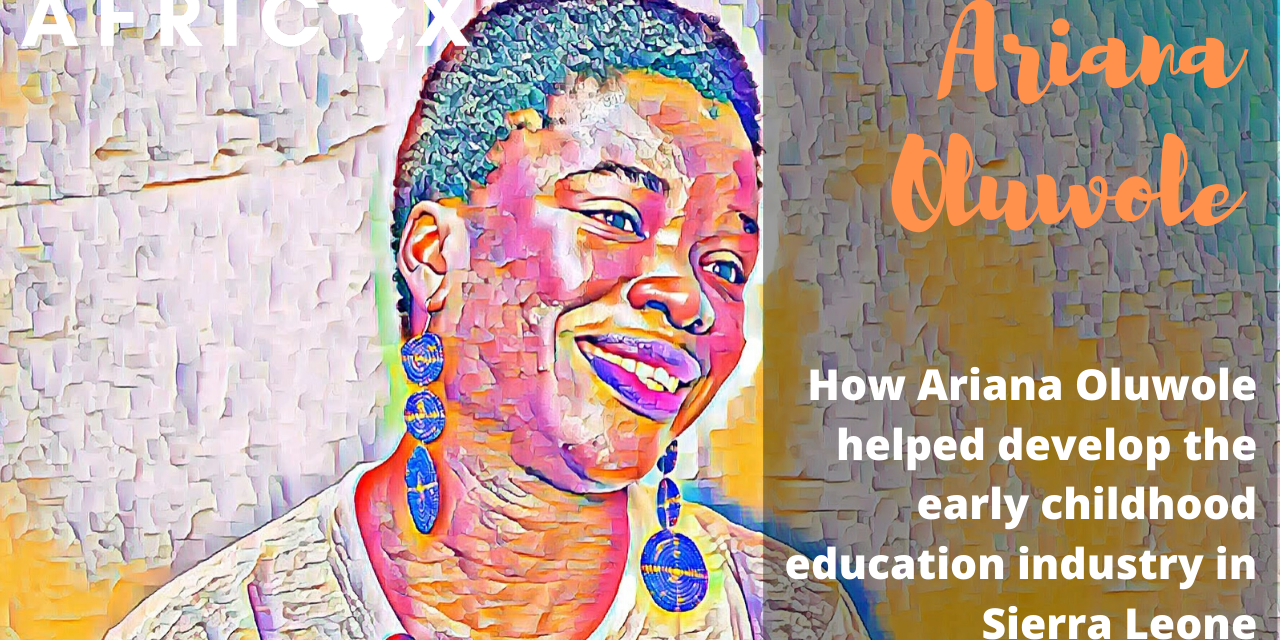 It’s very common to observe something in society that is not working and complain about it, complain that it needs to be solved. Less common so, to take accountability for whatever isn’t working, be proactive in finding solutions that work for you and in so doing, fix the problem for the society as a whole. This is something that Ariana Oluwole has done in founding Narnia Daycare. Narnia is a children’s daycare founded in 2013 in Freetown, Sierra Leone, that has to date catered to over 900 children, all inspired by the desire for a mother to care for her child.

When Ariana got her first child, she realised that there were not many early learning centres for children in Freetown. Knowing the value to children of early education and being in a nurturing and engaging environment, she decided to quit her job so that she could support her son’s development. In doing that, she had the thought to extend that care to people around her.

Her initial step was to take a lot of crash courses on early childhood education. She was fortunate to get connected with a Serbian programme (NTC) that supported her with training on updated information. She also learned a lot from her mother who was a retired teacher at the time, after 40 years plus of working with children. It was during this time of immersive learning that she realised she could not run the project by herself, so she invited her mother out of retirement to help her out.

After going through all the training, she decided to bring people on board who wanted to learn. This developed into an internship programme for young women who wanted to be more engaged but lacked the opportunity or proper motivation to do so. Ariana purposely chose to work with these women in her community because she realised that they were so brilliant and had a lot to offer, but they were also so dependent on handouts from family or who they would get married to, that they didn’t live out their full potential. It became a two way thing, the girls would get trained on early childhood education and personal development, and in turn work with the children. All the 21 women in the staff came from that programme and it’s a thing that Narnia continues to do.

But business didn’t pick up immediately. Initially, nobody wanted to come in. She would go sit at community centres, hospitals, talk to parents, but they preferred to stay home with their kids. She credits this to tradition, that when a young woman who’s not even 30 and has only one child starts a childcare centre, people don’t trust her capabilities. Then when the Ebola crisis happened she had to close shop, and lost thousands of dollars that she had spent to lease her space. Ironically enough, this was actually when people really started appreciating her work. She had a friend that was involved in a project that was providing social support for children across Sierra Leone. Her friend reached out to her when she heard that Narnia was closed, and asked her to join the project. They were working with some of the most deprived communities. It was very public, and people started taking note of the dedication and passion that they had for the work.

When the crisis ended, she decided to relaunch Narnia. She got a loan from her supportive husband, and used her mother’s garden to build her own space. This time around, people started coming in even before the building was complete. Along with the media coverage, Ariana also appreciates the few parents that came in initially and did a  fantastic job at spreading the word. Narnia opens at 7am in the morning and closes as late as 8pm on days when parents can’t make pick up because of traffic. It’s this dedication and consistency to bless, uplift, and support that has resulted in their success.

Narnia Daycare is the first of its kind in Sierra Leone because it goes beyond just taking care of the child, making sure they are well fed, that they sleep, and minding them until their parents pick them up. They have introduced the philosophy of getting children ready for school and grooming them for life by introducing them to social awareness, the environment, and emotional intelligence. They also provide training sessions for parents and families who want to learn how to care for their kids. The money that comes from this training, they use to support the kids who cannot afford to pay for the daycare. This makes up the for-profit and not-for-profit components of the business.

For Ariana, there is still so much left to do within her community as it relates to childcare. She has a strong desire to teach people family planning because her centre can only hold so many children, yet that doesn’t stop the child birth rate. She has a waiting list one year out, and she keeps referring clients to other centres that have come up over the years. Even though to some this looks like supporting her competition, it gives her so much joy to support others that believe in the work that she is doing, the work of building a wealthy nation by caring for children.

Her ideal partnership would be with the government, for it to give her land to build a centre that would accommodate as many kids and expectant mothers as possible. She would also like to partner with an organization like UNICEF that could guarantee continued learning. She advises young people to think outside the box and engage themselves because there’s always a solution waiting to be found.

Watch the full interview here to learn how Ariana got introduced to business, financed launching her business twice, handles the mental stress that comes with entrepreneurship, supplements her income with freelance coaching, the role that mentors have played in her journey, how her experience with multiple car crashes and paralysis have built her resilience in business, and how she supports her staff to start their own businesses as well.

FIND FURTHER INFORMATION ON ARIANA AND HER AMAZING JOURNEY: